Hello, you! Are you ready to reach your goal? Let’s get going >
SHARE
We are Loving 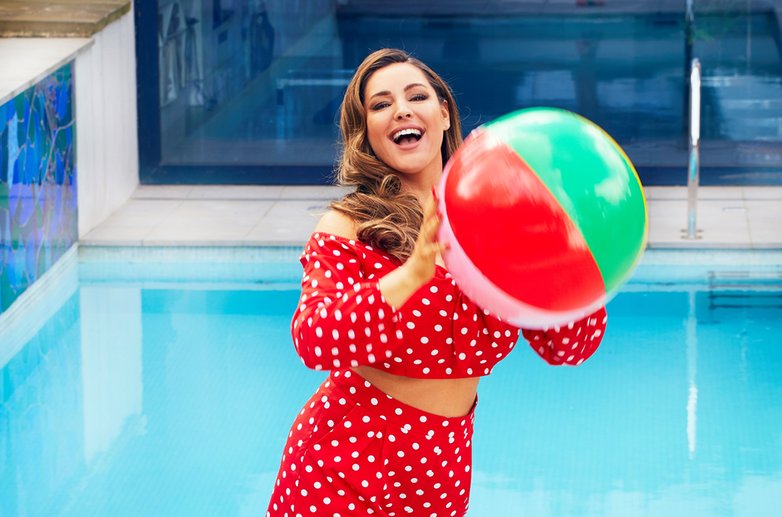 Kelly first started her journey with SlimFast last year and has now reached a weight loss of 2 stone in time for summer! 2019 has been a great year so far for Kelly: she’s just been announced as one of Heart London’s full-time presenters and with her 40th birthday later this year, she’s already achieved her goal weight— it’s no wonder she’s smiling from ear to ear and brimming with confidence.

To celebrate, she’s styling up her summer with a 50’s inspired photoshoot and sharing her transformation story with Hello!

Kelly, who’s dropped from a size 16 tells Hello! “if I hit 40 and I’m a size 10-12, I’ll be super happy. Women look after our homes and families and it’s important to look after ourselves too. I’ve basically dropped about two stone on SlimFast Advanced Vitality 4 in 1 Action and I feel brilliant.”

“I can eat 1,500 calories a day as long as I take the sachets 15 minutes before a meal. It helps fill you up, so my portions got smaller and gradually I started dropping the pounds.” Coupled with her regiment of running up to four times a week and regular yoga sessions, it’s no wonder Kelly is feeling better than ever.

“One of the biggest changes was my mind and attitude. As soon as I began to lose weight, I had more energy and confidence to do the things I really wanted to do. Instead of turning opportunities down, I began saying: ‘Yes’ and it led to so many good things for me.”

I’m sure we can all agree that Kelly looks fab! For more information about SlimFast Advanced Vitality 4 in 1 Action sachets and capsules, check it out here.


Why not join our SlimFast Community?

X
Thanks for registering.
Let's get you started.
We’ve just sent you an email, please click the link 'subscribe now'
X
Forgot your password
X
Please check your email inbox
X
Reset password
X
Your password was successfully changed
X
Hello you!
Be the first to hear about our latest products, tips, recipes, ambassador gossip, competitions and much more…
X

Body Mass Index (BMI) is a calculation that uses your height and weight to determine a number that represents your risk for obesity-related health conditions such as heart disease, hypertension and diabetes. The higher your BMI is over 25, the greater the risk of developing these conditions.**

**There are some limitations to the Body Mass Index calculation, because it does not measure body composition. BMI overestimates body fat in persons who are very muscular and it can underestimate body fat in persons who have lost muscle mass (e.g., many elderly). People with more muscular builds may be classified as overweight according to BMI numbers even if they have a very healthy body fat percentage. A high BMI from increased muscle alone is not associated with health risks. These are the recommended classifications for BMI, adopted by the Expert Panel on the Identification, Evaluation, and Treatment of Overweight & Obesity in Adults, and endorsed by leading organizations of health professionals. 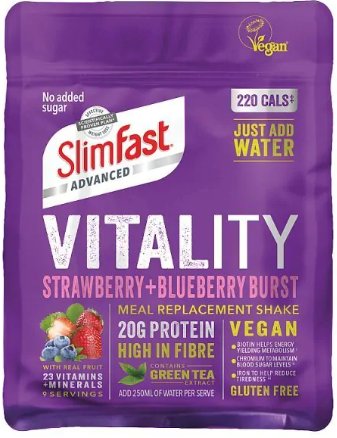 If you have bought SlimFast Advanced Vitality Strawberry + Blueberry Burst – Vegan Powder 450g and have an allergy or intolerance to dairy do not drink. It is important to note this only applies to specific batches 8291, 8292, 8293, 8294 (the 4-digit batch code can be found on the back of pack beneath the best before date).